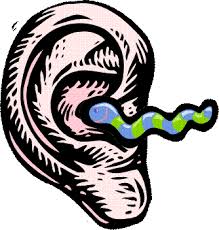 Blue Sky mine – Midnight Oil
This song has been an earworm for me for YEARS. And every time I think about, it starts up (happily playing in my head right now!).
Why an earworm, for me, it is the melody and some of the lyrics. The melody is consistent and repetitious, does not stray much out of one octave, very constant style. So it gets in my ear and stays. I am not a big fan of Midnight Oil, though this is one of my favourite songs of theirs – is that because it is an earworm and I hear it constantly in my head, or, because I liked it that it became an earworm. Chicken and egg.

Love this band, love this song. And an earworm for me because of the same repertoire – repetitive beat, constant melody - and limited lyrics. Limited lyrics really makes it, constant repetition, what a cycle!  and a fabulous beat. The song beats in your head, your head bobs out the chorus and refrain, with a great guitar solo. Not a bad earworm to have.

When jumping around like a loon on the dance floor, overwrought musical complexity can stymie the enjoyment somewhat - that's why they often check noodling in at the cloak room. The real geniuses of production can disguise complexity over hours of 'progression' or, even better, to provide easy to consume polyrhythms without you even noticing it. This tune, Sunday Shouting by Johnny Corporate, is none of the above. It wears its colours proudly on its sleeve. It's an unashamedly short cycle of very catchy sax notes, bridged with an equally basic yet catchy base line. Repetition is key. When repetition is done well repetition can be a great mechanism to repeat listens, repeatedly. Psychologically, you find yourself instantaneously pleased with yourself, that you already know each section of the song before it arrives, after only hearing it once. Humans love routine, and Johnny obviously realised that you can't have enough of a good thing.


I play samba in a percussion group. Over the years, Brazilian swing has provided an almost constant rhythmic background to daily life. My pedestrian footfall provides the primera and segunda, and then the brain fills-in with claves and syncopation. Much to the annoyance of work colleagues and people in the lift, I can randomly verbalise rhythms or just tap them out with my hands (tourette's for drummers). So, my second earworm is most definitely some crazy, class samba action esquenta from Rio. Manguiera are an awesome school and this video always gets the blood boiling. Boom!


I love a good catchy pop song. I chose two that refuse to leave my head for days after I put them on. The first is from Charli XCX, an aggressively provocative 2010s answer to comparatively quaint 90s icons such as The Spice Girls. It’s an intensely youthful song, about the simple chaotic pleasures of taking drugs with good friends. Its not a song intended for my demographic, but the quality of the hooks is too good to ignore.

My second choice is perhaps my favourite ever pop song. If Take My Hand reflects the simple pleasures of the cool and extroverted youth, this song shows the other side – youth can be bittersweet for those too introverted, awkward or simply dull to participate in the normative reckless hedonism that so many pop songs celebrate. Here’s Where The Story Ends is about youthful adventures that end before they begin, with Harriet Wheeler’s clear voice combining perfectly with her husband-to-be’s jangly guitar.

The Sundays - Here's Where the Story Ends.

Leaving pondering this theme till the evening of our get-together was probably not the best idea, and I did struggle to think of songs that are regularly on my mind. I'm not really much of a hummer or tapper you see, and generally have the more recent tracks I've listened to bouncing around my head than those from way-back-when. Eternal Flame was the first track I thought of, but in the interest of keeping my Music Club credibility in the positive (or having any chance of getting into the positive), I racked my brains extra hard to come up with something a bit more... manly!

Elton John - Measure of a Man

My upbringing was quite immersed in the Rocky movies thanks to an older cousin who had all of them on VHS and the soundtracks on tape, playing these regularly when we hung out. The soundtracks are pretty cool, and through the first 5 movies being released over the span of 14 years, have a real sense of time and place. This track from the closing credits of the fifth movie has stayed with me since 1991-92, and although feels like a typical, epic, powerful Elton John track, steers away from some of the cheesyness some of his more commonly played songs contain. Very uplifting!

This is just fun, and will surely remain in your head for some time after spinning it! I luckily came across a live performance of Gogol Bordello on MTV2 a couple of weeks before they were due to play a festival I was attending. It was this track, and I thought the atmosphere looked amazing. They played the festival at 4pm in baking sunshine, and I made sure to see them. What started off as a crowd of a few hundred soon turned into many thousands as songs like this one drew bleary-eyed festival hippies and soon-to-be-hippies from all around. Do not miss this band if you ever have the chance to see them live.


For me, earworms come and go but there are some that return time and again. Glokenpop from the album Grand Slam by Spiderbait is one such. The beauty of this song is that it's all self contained. Three minutes and twelve seconds of sage instruction, sound advice and intense mentoring of the budding pop star, all set to an uplifting riff... and yet is that a whiff of artist vs. industry cynicism I detect? In the same vein as Weezer - Pork and Beans or Pink Floyd - Have a Cigar? Surely not. Puts an entirely different perspective on things... like in the video, are they chocolate mousses or shiny dog turds?
(although the video name is Glockenpop I'll stay with the album name)


The second one is floating amongst my current transient jetsam... The group is called WORLD ORDER (yes, all caps) and, like a lot of Japanese groups, there is an important visual aspect to their work. In this case it is choreography. Think synchronised C3-P0 in a suit. If you're struggling with what that might look like then spare a thought for the average unsuspecting Japanese person that may have the misfortune to be caught up in one of their productions... stunned mullet doesn't do justice to some of the reactions. It's leader, Genki Sudo, is responsible for pretty much everything, singing, performing, songwriting, directing, producing... the lot. Not bad for an ex-MMA fighter. It's mostly in Japanese and I'm thankful they, like the English, think nothing of nicking words from other languages and using them as and when. Because of that I get to sing 'Have a Nice Day' three times and 'Everywhere' twelve times in four and a half minutes in a song I don't really understand...

Posted by Christian at 2:04 PM