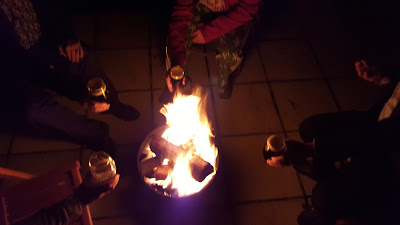 
Abigail was a delicious concoction: feisty, chocolate overtones and an interesting roasted orange citrus flavour. She was also very creamy and smooth, until the morning after, whereupon, she pounded the temporal regions with evil intent. It was definitely an autumnal brew, proud to herald the new season: Indian summers, low sun and long shadows; Crisp air, bright skies and the first smell of lit fires.

I chose the Smoke Fairies for my first tune. Two lovely Mancunian lasses that have voices I'd buy expensive gifts for, melodies I'd marry and soaring harmonies that make me weak at the knees. Summer Fades is from the album Through Low Light and Trees. It's a tale of love, new-beginnings and hope - a rousing arrangement that nails the autumnal aesthetic. I imagine nursing a pint of ale in a quaint village pub, looking out of a large window beaded with rain, sitting near the fire in a big knit jumper, thoughtfully awaiting the arrival of either smoke fairy.

For tune number two, I went for the Cocteau Twins. Possibly one of the most distinctive bands to have graced this earth, using lush guitars and mysterious vocals. I was introduced to them while being driven to isthmian league games, midweek, after dark, with the exciting prospect of Bovril in a styrofoam cup in the club room. Associations in more way than one. I chose The Itchy Glowbo Blow from Blue Bell Knoll (mostly for the mean alliteration). Considering there are no lyrics or words used in Liz's vocal delivery - it's the textures, themes and tone of their work that manifests Autumn whenever I listen to it.


This time, I tried to avoid literal references to any season. Instead, I started with what autumn means to me: the transition back to indoor living, enthusiasm for catching up with friends in cosy places... and a little bit of melancholy over impending winter. (Daily cog walks with horizontal rain driven by southerlies.) Both of my selections reflect that combination of sweetness and wistfulness.

A bit of actual tango, complete with non-ironic accordion. His voice is, as usual, world-weary and laconic, but an enthusiasm breaks through at the end of each verse. (This is clear even if you don't know any Italian!) The soundtrack to whisky by the fire on a cool night. Elegance, including that video.

Story of growth and of loss, told with the literal reference to a picture of Marlene Dietrich hanging inside a house. I adore her songwriting, very evocative and describes intimate scenes vividly. Her singing voice is cheery in tone, usually in contrast to the lyrics; this is someone who had a popular hit with a song about an abused child. I saw her quite often in the nineties and pretty much lost track of her after that... time to catch up.

Autumn is a season, and seasons are a fundamental experience of humanity and a fundamental metaphor for understanding life. Each season, like the present, does not itself exist, but is merely a transition between past and future. Each season is the mirror of all the others. In each season, the meaning of the other seasons is revealed. So autumn is defined by the passing of summer, foreknowledge of winter and anticipation of...

Seasons are a metaphor most strongly for our own life. Our life has but four seasons, though we hope of course for rebirth into a new spring at our life’s end. So the autumn of our lives bring sorrow for the lost high summer of our youth. And in that summer the anticipation of our fall creates a bittersweet mixture of excitement and sadness that it will end too soon. Dream pop captures the melancholy of youth, in particular...

Summer Holiday by Wild Nothing


New Zealand is not, for the most part, blessed with four seasons. Here, the "summer or not-summer" seasons of the North Side are reflected in all levels of our cultural practice, from year-round jandals sported by some north of the Bombay Hills, to Wellingtonians who complain bitterly of the heat when it's above 19 degrees C, and bitterly of the cold when it's below 18 degrees C. This is amplified by the reversal of what passes for seasons compared to the northern hemisphere, so that Easter's spring renewal and Halloween's acknowledgement of impending winter darkness are odd rituals that don't reflect the environment we are actually experiencing.

A true autumn, or Fall as I knew it in Western Pennsylvania, is a wonderful thing. The hot summer days ease off and the world transforms into bright blushes of crimson and orange. There's anticipation and preparation for the darker and cold days to come as well as enjoyment of the transformed world. The song I chose reflects this beauty and trepidation. Jens Lekman's Maple Leaves on the one hand an upbeat pop song -- a Bo Diddley strum and rattling rhythm with a chorus that plays around with mishearing. On the other hand the sampled strings, bells, and Lekman's voice make for a decidedly melancholy ambience. Together these elements capture the rueful pleasures of autumn.

If autumn is about the changing seasons, it's also about the rituals that connect people with their environments and with the past. From our seasonless paradise it may seem bizarre that, come October, so many Americans don their "fall colors" and begin to think about Halloween, and Thanksgiving and take to "pumpkin-spiced" beers and coffee with so much relish. But there is comfort to be had in the rituals, for their own pleasures (you can keep the pumpkin-spiced anything thanks) and also because the connection to tradition and the connection to the past is a reminder that eventually winter will end, climate-change notwithstanding. For my second selection I chose a standard, in this case covered with much drama but not undue irony by old man of alternative rock, Mark Lanegan.

My choices are somewhat literal in that Autumn is in the title of both, and I admit it, I did search my collection for the word 'Autumn' in the hope of finding something cool and quickly. And I believe I did...

Autumn's Ablaze by Primordial
Primordial are Ireland's most popular metal band, regularly playing to crowds of tens of thousands during the European festival period. To me their music perfectly fits with Autumnal tides; morose and broodingly epic, despairing but with hope, and never reaching the bleakness of winter, nor the joy of summer. This is from their second album, 1998's A Journey's End and is typical of their sound which has evolved through refinement rather than radical change. Autumn continues, you might say...

Autumn Forever by Jeff Wayne from War of the Worlds
As part of the War of the Worlds narrative, Autumn Forever picks up story with the invaders well on top in the war. The world has been devastated, and our protagonist is left wearily searching for his love. Despite his life being "forever Autumn, 'cos you're not here", and mankind being massacred, there is positivity, strength and hope in this epic tune, delivered as only a synth can deliver such emotion. The prevailing WotW signature tune carry through the track fantastically. And it must be said, I love the image I get when I hear that "the horses bits were covered with foam"  :-)

Posted by Christian at 1:59 AM No comments: