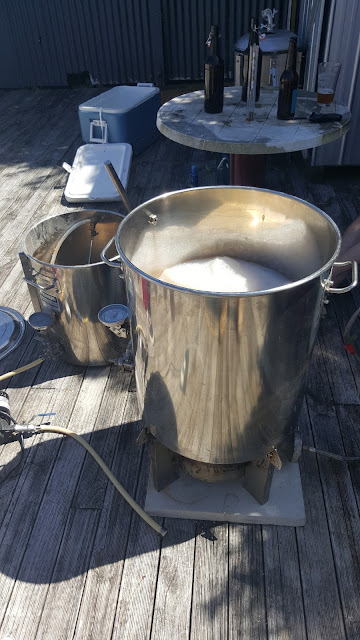 We decided to combine our love of music and beer with the ambitious first foray into Brewsic club (play a whole album each while we brew some beer). Jake invited us, thus:

The theme will be concept albums. Ever since Woody Guthrie's Dustbowl Ballads, musicians have used the 12 inch, 33rpm record as a physical platform for sustained artistic expression outside the radio-friendly unit shifting format. In this dismal age of Spotify Discover Weekly playlists, we shall use the time given to us by an all-grain brew day to celebrate vision, artistry, and self-indulgence.

My choice for this inaugural 'Brewsic Club' is King Diamond's first concept album, 1987's Abigail. The story, set in 1845, follows a couple, Miriam and Jonathan, who move into an old, inherited mansion, at which point they're warned by mysterious horsemen that there's to be danger afoot should they not stay away. Through some ghostly plot development, we and the couple, learn of the previous owner of the mansion, who killed his unfaithful wife and delivered and entombed her stillborn daughter, Abigail, some 80 years previous. Miriam soon becomes very pregnant, with the child growing inside her at a ferocious pace. They decide to kill Miriam to prevent this abomination entering the world, but the whole thing backfires when Miriam finds herself possessed, kills Jonathan, delivers Abigail mark-2 and dies leaving Abigail to run a-muck when she comes of age. It's heart and gut wrenching stuff played out in the falsetto-laden 80's shreek-metal style that defines King Diamond. And despite that, it's a damn good album. Enjoy!


Post Script: The name of the Red IPA was duly christened Abigail (a-big-ale) due to it's evil assault on the senses and the likelihood that it's presence will be felt long after it has possessed us. Jake is considering an overarching series concept that will include the following brews to look forward to: Still born bourbon-aged stout, Count La'Fey Belgian ale, yellow-eyed witte, 18 will become 90/- wee heavy.

Haken are a band that only do concept albums - they are also stalwarts of the prog-rock scene, which is awash with highfalutin concepts and noodly navel gazing. Their second album is called Visions, which was chosen because the music and lyrics are fantastic guides through the curious catacombs of a troubled mind. The music is also the best reflection of an album length concept that I have yet heard: Recurring themes crop up throughout the duration, and the musical story ebbs, flows, intrigues and supports the lyrics seamlessly. The musicianship is quite simply amazing. You want dramatic pauses, carnival sideshows, James Bond allusions, mild delusions, deep contemplation, narrative twists and turns? They compositionally nail the lot.

The concept is that the guitarist had a lucid dream of death then crafted this story about a boy who does the same, growing up fearing and readying himself for the final moment. When it arises he sees that the killer is actually a former self caught in this deja vu death trap. The lyrics seem to mention a shape shifting sister, that I can't seem to fit into my understanding of the story. Schizophrenia? Maybe. It's just an amazing album on many levels. I've listened to it all the way through many times and couldn't resist doing so again while writing this. Genius!

We played this music while brewing beer. To me alcohol is an inter-temporal energy transmission device - a means to borrow emotional and mental energy from your future to increase the intensity of now, at the expense of tomorrow. In 1984, Bob Mould may not have been brewing beer but he sure was drinking a lot of it. He would drink so much in fact that a few years later he went teetotal. But in the meantime, he borrowed from his future and created an album of incredible density of mind and spirit, along with his collaborator/competitors Grant Hart and Greg Norton as part of iconic hardcore punk band Husker Du. Zen Arcade is their concept album, although I enjoy it much more for the shredding guitars and furious drums than the lyrics. The lyrics tell a story of a young man lost and wandering, eventually waking up sweaty in the album's highlight for me, a 15-minute hallucinogenic jam called Dreams Reoccurring. But regardless of the lyrical content, all the songs express directly the grating nervous internal state of being young, pissed, pissed off, and with no idea how to make sense of the world or one's place in it. The fact that Bob Mould is gay and grew up in the midwest of the 1970s gives this emotion more heft that the usual teenage angst. It is an album that could only be made by people in their early 20s, and I'm sure will never be topped by those who made it, as much as I like Bob Mould's later solo work. Great music to drink beer to.

The Hold Steady are responsible for a couple of great concept albums, and for their first four albums at least, might have been described as a concept band as they developed lyrical and musical motifs, following a handful of characters through druggy, messed up lives on the economic, social and spiritual margins of the American midwest. Separation Sunday, their second album, doesn't quite tell the story of Holly, a teenage girl whose rebellion leads her into a life of drugs and drug dealing, casual sex and prostitution, and born again Christianity in the Twin Cities, Minneapolis and Saint Paul. This is loud, bar room rock, but the lyrics traverse biblical allusions and intertextual references to past and future Hold Steady records, and evokes a striking sense of place. This is the America of Springsteen and the Replacements, where the lives of scoundrels become epic, and where Holly's return from the wilderness, crashing a church service to tell the congregation how a resurrection really feels, really feels like redemption.