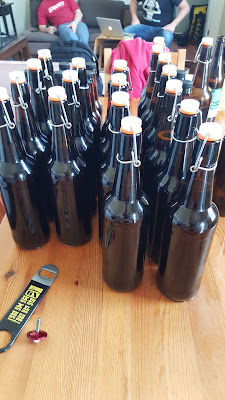 The brew had fermented and Abigail was ready for her final phase of gestation. While the bottles were being filled, we decided upon a quick theme of Birds - two songs and a beer match, if you so desired.


My first pick is from a recent acquisition, Swindle. He is a talented producer from the UK who originated from the gritty London Grime scene, went through Purple (look it up) and ended up making a p-funk, Zapp influenced, dubstep, jazz and electronic mash-up with his album Peace, Love and Music. The general vibe reminds me of Bassment Jaxx or Deekline and Wizard at their most creative and energetic. Blackbird has massive stabbing synths, sweeping strings and birdsong samples galore.

I matched it with Garage Project, Fringe Fruit Edition, that see's an equally interesting mash up of cucumber, mint, lime and hops to enliven the summer palate.

The second pick was from Martin Green. I've been going through an English folk revival of late and this song summons a scene of a crepuscular ploughed fields in autumn - ravens scowling around empty furrows - their distinctive rasping kraas echoing back off fog. The song is called Three Ravens from the album Crow's Bones. Deliciously arranged Celtic instrumentation breathlessly rasps and kraas, supporting a fragile female voice.

Matched with Thornbridge Brewery's Cocoa Porter for a dark, rich, smooth taste of the motherland to wistfully indulge melancholy with.


When I saw Andrew Bird in Pittsburgh on the Noble Beast tour he complained that he'd had to get up early that morning to fly to Chicago to appear on Oprah. This was a problem, he said, because he hated getting up early almost as much as he hated flying. Not much of a bird.

Spare-ohs, from Armchair Aprocrypha, is about birds. Specifically, it's about his chickens. The chickens met a cruel fate at the hands of American wildlife, and finches and sparrows used the ex-chickens' feathers to build nests in the chimneys of the houses in the neighbourhood. Bird imagines these feathers going up in flames and turning to ash, drifting across town and onto the ignorant populace below. The song then veers into a drunken conversation/meta-commentary during which he accuses himself of the obviousness of the cycle of life imagery before being called "too obstruce." He responds, befuddled by the made up term, "I just thought it was a kind of bird."

Before I could get very far through my spiel about Bill Callahan's Too Many Birds, Tim accused me of letting Callahan become my Brian Eno, in reference to a former music club member who found an Eno tune for every theme. Slander of course, as I've never actually played a Callahan selection at music club. Piqued, I switched my choice to Birds of Maya's bluesy noise rock High Up On The Hill. Birds of Maya are a Philedelphia band whose guitarist, Mike Polizze, went on to form low-fi outfit Purling Hiss, who themselves are connected to the War on Drugs and Kurt Vile. The whole song could be a taxonomy of central American avian species for all you can hear the lyrics, but it's good rowdy fun.

I was still two years from puberty, so even once the film began I couldn't quite understand why there were no birds in sight. I was disappointed because I knew from Willard Price's novels that the Papuan avians are famed for their beauty.

My first song commerated this event - Bird of Paradise by Charlie Parker. It's smooth 50s jazz evokes the playboy mansion, except in this case one overseen by the Bart Simpson version of Hef, bubble-blowing pipe and all.

My second song could be read as the soundtrack to the sequel - a song celebrating my eventual eruption into puberty. Birds of fire by the Mahavishnu Orchestra is one of the best jazz-rock excesses of perhaps the best ever jazz-rock band, capturing well the excitement and confusion of that most awkward stage of life.

My choices are by two Irish bands.

Lonnie by The Electric Penguins

The only link between birds and The Electric Penguins that I'm aware of, is in the name, so this one is a little tenuous. But that's ok, having seen little exposure over the last decade even by Irish standards, I'm sure they'd be happy with all they can get. The EPs are a two piece from Dublin, who interestingly chose 'Goodbye from the Electric Penguins' as the title to their first album back in 2006. This didn't make too much of a spash (pun intended) upon release, and I only came across it by a colleague handing me the CD to try while we worked together. That used to happen, before electronic media took away the tangible aspect of music sharing. They stayed on my conscious ever since, this album being a pleasant, electronic swell of indie dream-state that I come back to any time I want to bop to more than wallpaper music, while still keeping functioning eardrums.

The great thing about this YouTube clip is the band introduce it themselves, so there's little I need to say here. This is the first time I've chosen Bell X1 for Music Club; it was always going to happen for a couple of reasons: 1. I really like them, 2. they're from my home town and went to my school. They've been described as being second only to U2 as Ireland's most popular rock band, and have released 6 albums with limited success outside of Ireland. And they started off known as Juniper with Damien Rice as lead singer. This track is from their latest album, Chop Chop, and some random person on songMeanings.com sumarises the meaning as: "Given the fact that swans mate for life, it's like he's talking to a woman that he's in love with, but we find out at the end that she's with somebody else and that he's on his own."