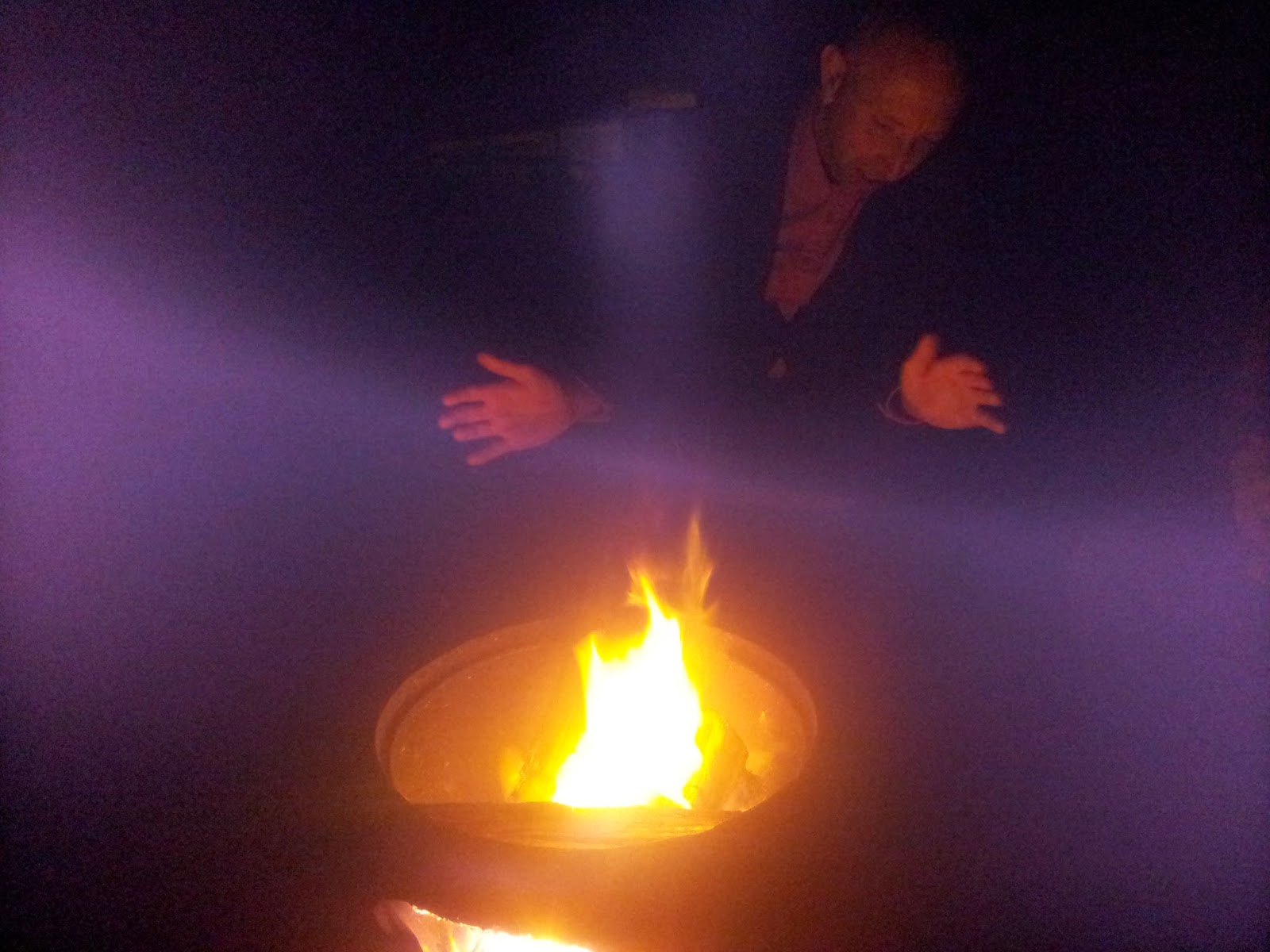 "Basically the idea is to choose two songs that evoke a 3am insomniac kind of vibe, two songs that blur the distinction between real and unreal, sleep and wakefulness, earth and space, fire and air etc. I for one will be consulting my psychedelic folk and melty electronica playlists. The theme could equally well have been 'fireside soundscapes', 'magical realism', 'flaming psychedelica', etc. Bonus points if you choose songs from an album with a picture of the moon on it.

You get the picture, anyway. We will be getting our hippy on."

The stars were out. The hypnotic flames of the fire provided warmth and ambiance against the backdrop of a typical howling Wellington southerly. On a par with 'eating with your eyes', environmentals definitely add a great deal to musical appreciation and the memorability of a Music Club gathering.

I jumped straight in with a recent find that for me is nachtmusik personified. Grandiose beta-wave inducing piano arpeggios supporting a dramatic chord progression crescendo. To my easily suggestible mind, the marvellously composed melody evokes more than a hint of Soft Cell. Lush loops, sustain and reverb build, moving from soothing to rousing, which on the version I played also erupts into excited, spontaneous applause at the end. Nils Frahm is from Berlin and crafts some excellent piano based electronica. This version of Says is from his live album, Spaces, but I also have it on another recent gem: Nick Warren, Soundgarden. I've listened to it heaps on both albums and aren't tiring of it. I seem to be very happy being repeatedly be taken on this glorious eight minute journey. Here's a nine minute version...


I had three options for my second selection. Utterly frozen by procrastination, yet not the wind, I let the Music Clubbers decide between Chanteuse, Sleeplessness or Ambience. Sleeplessness prevailed. That's the name of a track on a great album by Keeno called Life Cycle. I broke the drum and bass duck! Oi oi!! People define this sub-genre as 'liquid' or even 'intelligent', neither of which monikas really do anything to helpfully explain things further. Keeno oozes craftmanship and is obviously on a crusade for drum and bass quality. He references a glorious past but delivers very well produced tunes that go beyond the basics of cut and paste pastiche. He develops ideas fully and complements them with soulful and intelligent (but not liquid!!) flourishes and vocals. It also redresses the balance that is a slightly maligned and cheesy Hospital Records output over the last few years. Med School makes perfect sense to these ears. The whole album is killer and I was nearly on the verge of taking two songs from the same. Invoking the majesty of a clear night sky, the track can easily straddle different moods, accompanying: pensive relaxation, animated brazier conversation and throwing some moody shapes in the moving shadow of the moon.

One of my favourite pastimes at my home in Kingston is to sit out in the evening on the terrace I built myself, enjoying the stars and the moonlit hills across the valley as I sit in front of a fire, listen to music and sip whiskey. For this music club version of the experience, I chose two songs to fit the mood, one minimalist, one maximalist.

The first was White Fire by Angel Olsen, a desert dream of heartbreak, simple noodling on electric guitar with spectral lyrics over the top.

The second was Hearts and Daggers by Espers, a goblin forest nightmare, a psychedelic mix of flute, electric guitar and pythonesque folk.

Thinking about the theme, rather than a chilled, tripping-at-one-with-nature selection, I felt compelled to make my first choice a representation of my kind of ideal, and regular night out. My mind gravitated to a frenetic, drawn-out, city-wide par-tay.

While perusing various record shops in Osaka, Japan, I happened across the genre of dark psychedelic trance. I spent a good hour having the owner introduce me to tracks reaching above 160 beats per minute (or "BPM" for the uninitiated), sending my brain into a dizzying spin. I picked up two or three albums, and the one that this track is taken from, Psychedelic Navigator, has stayed with me as a perfect head-fuck 6 years on. I delved little further into the genre, and can't find much online about the album or Mr. Gust, at least not in English. But I love what these guys do, steering dangerously close to over-repetition, even closer to the brink of madness, all at breakneck speeds and with maddening creativity.

My second choice is of a chilled, tripping-at-one-with-nature night under the stars. I came across Flower Travellin' Band when Mikael Akerfeldt of Opeth mentioned the passing of an influential member of the band in a Facebook post. Their back-catalog is more miss than hit, but this album, Satori, is a real, lasting gem. Thom Jurek of All Music describes the album better than I ever could, so I'll quote him here:
From power chords to Eastern-tinged, North African, six-string freakouts, to crashing tom toms, to basses blasting into the red zone, Satori is a journey to the center of someplace that seems familiar but has never before been visited. It is a new sonic universe constructed from cast-off elements of the popular culture of the LSD generation. ... It's monolithic, expansive, flipped to wig city, and full of a beach blanket bong-out muscularity.

Dr John is a mainstay of New Orleans. Since the 1950s he has made his mark as an intrepeter of NOLA standards, a proponent of funk, and as a practicioner of voodoo. His first album, Gris-Gris, captures the feel of Louisana in a haze of psychedelic r&b. The final track, I Walk on Guilded Splinters, is based on a voodoo church song. The pulsing rhythm section and sparse guitar and horns, along with the chant-like backing vocals give this track the feel of a ritual performed deep in the swamp where the light of the moon doesn't reach. I've been to New Orleans a couple of time but never participated in a voodoo ritual or been to the swamp. But Gris-Gris, for me, is an album for late on a Saturday evening when things are feeling a little dangerous.

On a Sunday night, when I'm relaxing after dinner, contemplating another week in the office, and guiltily neglecting to iron my shirts, I tend to fall into a certain mood. Let us call it "chilled." When I'm chilling on a Sunday night there are three records I turn to. They are Coltrane's A Love Supreme, Kurt Vile's
Smoke Ring For My Halo, and Van Morrison's Astral Weeks. I'm saving Kurt Vile up for when we do the songs-you-thought-were-about-drugs-but-actually-aren't theme (and actually there's a Van Morrison track for that one too) and no track on A Love Supreme makes sense without the rest of A Love Supreme, so here is Van Morrison's Madame George, a meandering dream that may or may not concern a drag queen wandering the streets of Belfast.

This selection will be remembered primarily because I unwittingly duplicated a selection from the same band made by Christian at a previous music club. Had I recovered from the ignominy of this music club faux pas in time,  I would have drawn an elegant comparison between the languorous velvet-cloaked jazz of 'the Gore' and the darkly unfurling dream logic of David Lynch's films. As it turned out, i just threw another log on the fire and burned with shame...

Simple explanation for this one - the best nights of my late adolescence were spent getting twatted to precisely this kind of stripped back rhythmic techno. This probably accounts for my short term memory loss (see above)

Posted by Christian at 1:43 AM No comments: