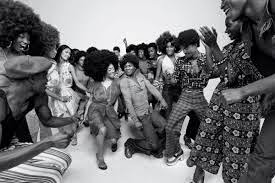 As a white, married, suburban, middle-aged father of two very little funk runs through my veins, so I made two funk-lite choices. Both were from the early 90s, a time when as a tweenage boy my musical consciousness was just beginning to emerge. My first song choice I had actually heard at the time, when it made no sense to me in the context of the heavy diet of classic rock I enjoyed courtesy of my father's musical taste. Every now and again he would bring something a little different home, such as the New Groove collection of acid jazz numbers, just to confuse us. I chose Nathan Haines' Lady J from this collection, mostly because it is inherently amusing hearing kiwi-accented rapping.

Unfortunately, this song was pretty bad at the time and the subsequent 20 years have done it no favours. So for my second song I chose a much better example of the same kind of thing, Jettin' by Digable Planets, from their album Blowout Comb. Even a white boy like me could tell this song was funky because the group repeatedly say so in the lyrics. This is the funk-influenced blend of jazz and rap that my father should have introduced me to as a boy. I was 30 before I found this most classic of albums, and suddenly the early 90s made sense in a way they never had to me before.


Funk is the insidious infection that has pervaded nearly every genre known to man. What the hell mankind did before its inception, goodness only knows. I assume the world was a slowly rotating mass of introspection and gloom (which we have already covered) with the odd soaring ode and inflected melody that merely hinted at happiness (tierce di picardie being an unsatisfactory case in point). Funk brings happiness and joy with such confident force that even when it only raises its head for a brief down stroke it invokes involuntary glee and merry movement. Funk is a key ingredient of soul, afrobeat, hip hop, break beat, quite a bit of 70's psychedelia, is abundant in the hallowed halls of acid jazz, and we even have to acknowledge its use in 90's rock, for historical completeness. So, it is with unrestrained excitement that I selected the following fellas from the UK who carry the eternal flame of funk forever forwards:

Smoove and Turrell are a duo on their third platter that knock out un-flappably consistent funky content. They hail from the North East and move between deep funk and up-beat soul revue with ease. Mr Turrell has a fantastic, powerful, velvet voice that confidently handles range, depth and pace that complements Smoove's knowledge of how to execute a deep groove. The song, Slow Down from the second album, Eccentric Audio, is a real barn-stormer.  Opening with a jaunty statement of intent; introducing a groovy verse, an energetic bridge and a rousing chorus. Release. Build. Cut. Copy. Repeat.

The Sound Stylistics provide a serious workout - hailing from the traditionalist side of the funky tracks. They comprise members that have been around the traps with other UK based funk infused outfits (JTQ, New Master Sounds, Galliano, Brand New Heavies, Incognito etc) so know there way around the perfectly positioned Amen break; A fully syncopated beat; Using flutes, organs, horns, and a full range of funky instrumentation to deliver some killer tunes. Knucklehead, from their 2009 offering Greasin' The Wheels has cool brass crescendo's and blasts, with a guitar and keys dual doing the most of the hard yards. Get your strut on!


The topic of 'Funk' is and was pretty wide. I focused on New Orleans just to keep things sane, NoLa being one of the funkiest places on the planet. This includes the fabulous (Funky) Meters, of course, but goes back to a series of Caribbean migrations and the slave trade of two centuries ago, and continues today with bounce and its distinctive take on hip-hop. "Gumbo' really just means 'stew', and the musical stew from New Orleans is really funky. I chose instrumentals, not that vocals can't be funky (The Godfather!) but lack of vocals means you need a stronger groove to stay engaged. The funk isn't the groove... but it does demand a groove, and a toe-tapping listen.

Warm-up music:
Robert Walter's 20th Congress - 'Shemp Time' from 'Money Shot'
Classic B3 organ as rhythmic driver. Smooth but not Muzak(tm) at all. Trio (keys+drums+guitar) with heavy rhythm, strong beats, and changing melodies. Really crisp production as a bonus. He was also one part of the Greyboy Allstars, a socal funk group that continues to perform today.
www.robertwalter.com

Galactic - 'Ha Di Ka' from 'Carnivale Electricos'
Theme of the album is Mardi Gras a/k/a Carnival. This song features a classic call-and-response, a strong guest vocalist, and groove to burn. They've been true to their roots as a party band (Galactic Prophylactic) but have honoured their NoLa history as well as being open to new musical styles.
www.galacticfunk.com

Primus, Tommy the cat. Les Claypool of Primus might be the world's funkiest bass player: and Tommy is one funky cat

What the funk? Being new to this I decided to play it safe. Keep it simple and all that. So I thought I’d stick to the dictionary definition of funk: ‘a strong offensive smell’ or ‘a state of paralysing fear’ or ‘music that combines elements of rhythm and blues and soul music and that is characterized by a percussive vocal style, static harmonies, and a strong bass line with heavy downbeats’. I chose the latter. Or rather, my first song saw me choosing the latter - on speed! (‘a related stimulant drug and especially an amphetamine’). The second track from The Time’s album, ‘What Time Is it?’ and first single release, it’s a song written by Prince, produced by Prince and every instrument is performed by Prince, (not at the same time, silly), and debates abound as to whether the impossible drum beat is man or machine. The shoulder jiggling bass however, is real.

What time is it?

My second choice officially outed me as a Prince fan and for that I blame my brother. In other news, I chose what any true purple pixie fan should, ‘Let’s work’.  The sixth track from Prince’s fourth album treats the polite listener to a plucky- randomised and low down dirty bass line, guaranteeing shoulder and hip jiggles (an improvement on my first selection..). You could argue that most of Prince’s stuff deals in some kind of oversharing of bass. You’d be right. But how delightful it is when the bassline can leave the rest of the instrumentation redundant. Here’s a live version in place of an unavailable album clip:

This theme had me thinking the lyrics "slam dunk the funk, put it up, if you got that feelin'" way too much over the last week. Luckily I got past that to select...

While not the most talented song writer or singer in the world, Charles definitely personifies "the funk" through his on-stage presence, and veracious love of intimate love with a lady or ladies. He performed here in Wellington as part of the NZ Arts Festival a year or so ago and everyone left smiling and feeling loved. Discovered by a Daptone Records producer in 2003 while performing as a James Brown tribute singer, the gravel-voiced star has since recorded two albums and his against-all-odds success has been documented in the film Soul of America. This is from his second album, Victim of Love, released in 2013 to generally positive reviews.

This track is taken from the second Even Better Than The Real Thing compilation compiled from Irish radio station Today FM's Ray D'arcy morning show. The albums feature Irish musicians covering well-known tracks. This is the most funky I reckon.

Having been managed by U2's management company and supporting U2 and REM, Paddy Casey has had mixed but generally good success in Ireland without breaking into the international scene. This medley of Granma's Hands and No Diggity is souled up nicely with the Dublin Gospel Choir.


Donald Byrd: The cerebral musicality of jazz mixed with the visceral groove of funk.

"Dominoes" by Donald Bird delves into one of the many sub-genres of funk – Jazz funk. It’s a fusion that induces delight or despair in most listeners, as this Mighty Boosh clip humorously illustrates. The song itself is sunny, groovesome and understated, and never fails to put me in a good mood.

The Story of the Funk

In a rather funkalicious coincidence, I, too, came bearing Mighty Booshian gifts, blind as I was in a funk trance. In the Story of the Funk, Old Gregg (he who lives on the bottom of the sea and has a Mangina), treats us to a rousing tale of The Funk, ‘a living creature about the size of a medicine ball but covered in teats which came from another planet and landed on Boostsy Collins' house’. To relive this wholesome story, in which finding the Funk – that ‘funky ball of tits from outer space’ – raises Collins up from a simple farmer to a high priest of slap base, and back again, watch on …  Mighty Boosh funk clip 2

Posted by Christian at 1:42 AM